Grace Kelly and Jean-Pierre Aumont having breakfast on a sea terrace, France, La Napoule near Cannes, 1955

The photograph was taken during the Cannes Film Festival and shows Grace Kelly and her companion. Shortly thereafter Kelly met Prince Rainier III of Monaco for the first time during a photo shoot, the two became a couple. After one year the wedding took place. The famous actress gave up her job at the age of 26 and became Princess Grace de Monaco. 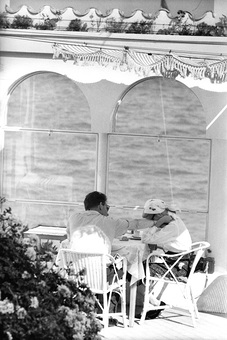