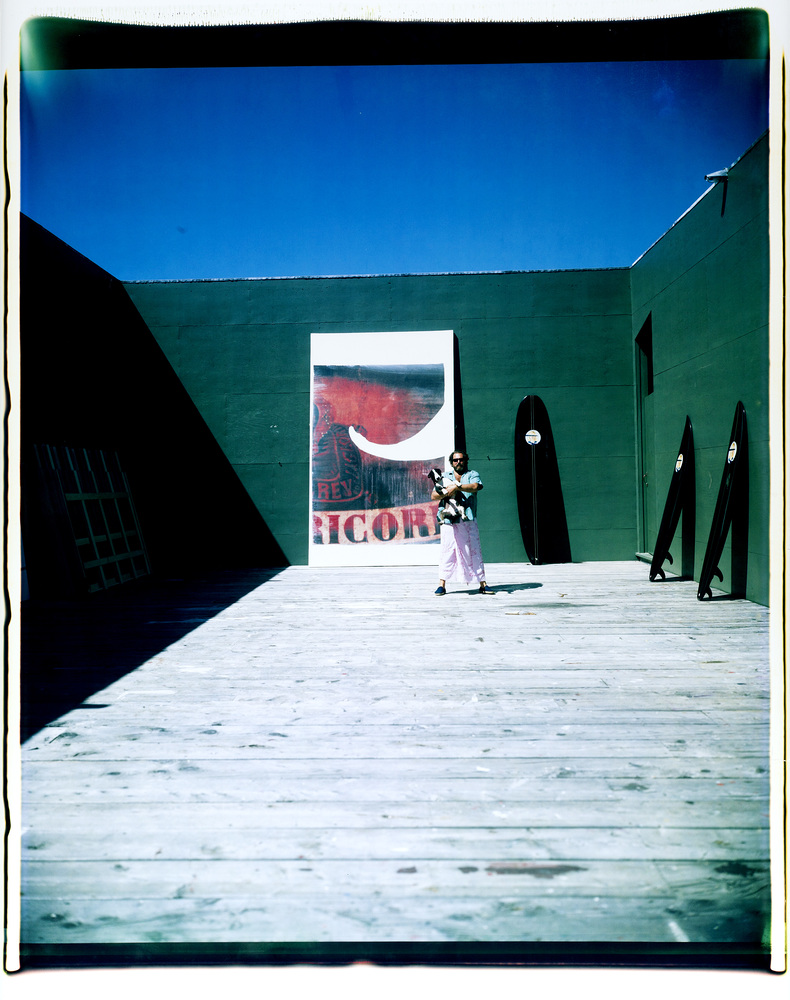 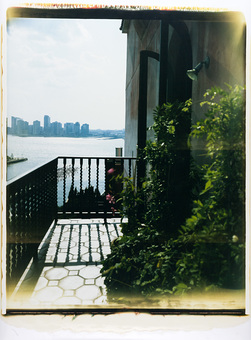 »The Polaroids are documents of places I built, sculptures I made, people I know, the process of painting. I used the camera as a medium.  Because of the camera I had the experience.  Anomalies, idiosyncrasies, light leaks and accidents form the character of these photographs – I just happen to press the button.«

The American painter, sculptor and filmmaker has been taking unique photographs for over a decade using a rare twenty by twenty-four inch Polaroid Land camera made in the 1970s. Many of the works are portraits of the artist’s family and friends.  These photographs are sketches of Schnabel’s life. There are charismatic portraits of Lou Reed, Plácido Domingo, Mickey Rourke, and Max von Sydow; private rooms in the Palazzo Chupi in New York; his studios in Montauk and Manhattan. Highly personal, poetic images result. Their immediacy and warmth account for much of their magic. These works embody the spontaneous act of trying to take a picture – they are pretty simple in that way.  They are images of friendship, of love, of an engaged life, and of melancholy too.

Schnabel took his first Polaroid picture in 2002 with the twenty by twenty-four inch handmade camera. Only six of these cameras are still known to exist. The large-format Polaroid film allows for a wide range of tones and shades that are unrivalled in their nuances.

Julian Schnabel was born in New York City in 1951.  In 1965 he moved with his family to Brownsville, Texas. He attended the University of Houston from 1969–73, receiving a BFA, and returned to New York to participate in the Whitney Museum Independent Study Program.

In 1978 Schnabel travelled throughout Europe and in Barcelona was particularly moved by the architecture of Antoni Gaudí. That same year he made his first plate painting, »The Patients and the Doctors«. His first solo painting exhibition took place at the Mary Boone Gallery in New York City in February 1979.

In 1996 Schnabel wrote and directed the feature film »Basquiat« about fellow New York artist Jean-Michel Basquiat. The film was in the official selection of the 1996 Venice Film Festival. Schnabel’s second film, »Before Night Falls«, based on the life of the late exiled Cuban novelist Reinaldo Arenas, won both the Grand Jury Prize and the Coppa Volpi for best actor, Javier Bardem, at the 2000 Venice Film Festival. In 2007 Schnabel directed his third film, »The Diving Bell and the Butterfly«. Schnabel received the award for Best Director at the Cannes Film Festival as well as Best Director at the Golden Globe Awards, where the film won Best Film in a Foreign Language. »The Diving Bell and the Butterfly« was nominated for four Oscars. That same year, 2007, he made a film of Lou Reed’s »Berlin« concert at St. Ann’s Warehouse in Brooklyn. His most recent film, »Mira«l, won the UNESCO as well as the UNICEF award at the 2010 Venice Film Festival. »Miral« was shown at the General Assembly Hall of the United Nations.

Schnabel’s work has been exhibited all over the world.  His paintings, sculptures, and works on paper have been the subject of numerous exhibitions.