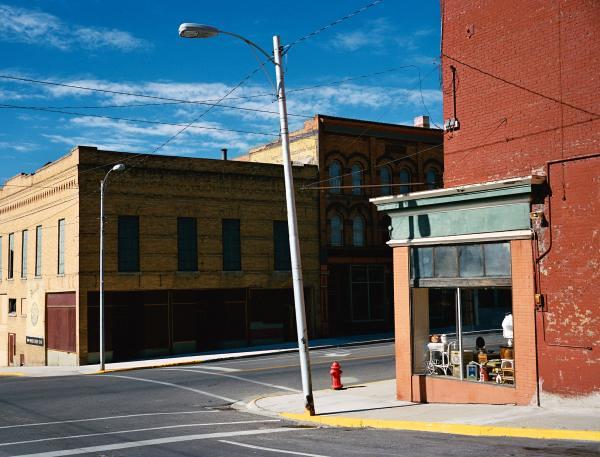 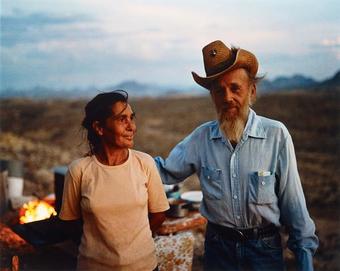 Ray and Grace, 'The Devil's Graveyard' 1983
From the series »Written in the West«

»When you travel a lot, and when you love to just wander around and get lost, you can end up in the most unusual spots … I don’t know, it must be some sort of built-in radar that often directs me to places that are strangely quiet, or quietly strange.«

Wim Wenders’ photographs mostly capture places void of people: abandoned, forgotten or unknown landscapes. They exude a subtle melancholy, exemplify a poetry of the forgotten and present things on the verge of disappearance. In his photographs, Wenders does not capture conventional or everyday recognisable spaces; instead, he is interested in the »invisible« and hence looks for the unknown or the seemingly marginal. His intention with the photographs is to capture places and landscapes and to distil the memory of these.

Wim Wenders was born in Düsseldorf in 1945. After two years of studying medicine and philosophy and a yearlong stay in Paris as a painter he attendedthe University of Television and Film in Munich from 1967 to 1970. One of the most important figures to emerge from the »New German Cinema« period in the 1970s, he was a founding member of the German film distribution »Filmverlag der Autoren« in 1971 and he established his own production company »Road Movies« in Berlin in 1975. Alongside directing atmospheric auteur films Wenders works with the medium of photography, and his poignant images of desolate landscapes engage themes including memory, time and movement.

Wenders lives in Berlin, together with his wife, photographer Donata Wenders.

His photography series, »Pictures from the surface of the Earth« and “Places, strange and quiet«, were exhibited in museums and art institutions around the world. Wim Wenders has published numerous books with essays and photographs.

Ray and Grace, 'The Devil's Graveyard' 1983
From the series »Written in the West«