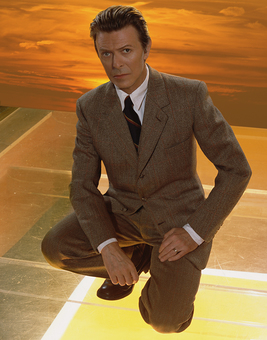 from 3200.00 €
Edition on request
See all works by Markus Klinko

Markus Klinko is an award-winning, international fashion/celebrity photographer and director. He has worked with many of today's most famous stars of film, music, and fashion for whom he created various cover art, such as Beyonce's Dangerously in Love, Mariah Carey's The Emancipation of Mimi, and David Bowie's Heathen.

Many of Klinko's celebrity photographs can be seen in his coffee table book ICONS (Perseus). Lincoln Center in New York presented an art exhibit showcasing many prints from the book and since, art galleries and museums around the world have featured his work.

Born in Switzerland, Klinko spent his early years training to become a classical harp soloist. He studied at the Conservatoire National Supérieur de Musique in Paris. Later, Klinko signed an exclusive recording contract with EMI Classics, as well as a management contract with Columbia Artists Management. He received the Grand Prix de Disque for his recording of French harp music, with members of the orchestra of the Paris Opera Bastille.

After a hand injury, Klinko decided to become a fashion photographer and retired from his international concert and recording career. During that time, he met Indrani Pal-Chaudhuri, who later became a regular collaborator in her role as his studio's digital postproduction artist and photo editor. From there, Klinko's work has been discovered by several iconic figures and he has been commissioned by celebrities and brands, as well as featured in popular magazines like Vogue, GQ, Vanity Fair, Harper's Bazaar, and Interview Magazine.

Klinko has appeared on E! News, Access Hollywood, Fashion Television, CNN's Showbiz Tonight and Larry King Live and has been the subject of the reality show Double Exposure on the Bravo network.

from 3200.00 €
Edition on request
See all works by Markus Klinko
Alle Werke ansehen
back
jump to top