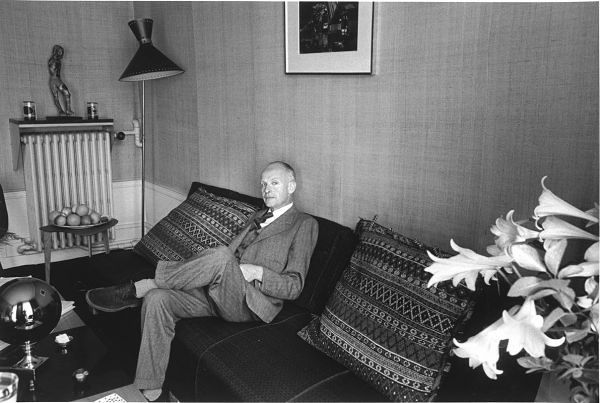 At the time this portrait was taken, Inge Morath and Henri Cartier-Bresson (1908–2004) knew each other for over a decade. When she started to work for Magnum agency in 1949, she studied his contact sheets as a young editor. Since 1953 she got her first commissions as a photographer and became assistant to Cartier-Bresson, in 1955 she was accepted as a full member at Magnum.
The image shows her mentor at a respectful distance, sitting on the sofa in his Parisian apartment. This approach is typical for Morath, who was never interested in rapid captures to gain overly spectacular or denuding moments (as some other followers of Cartier-Bresson were). Instead, she favoured a 50mm-lens for her camera, as well as enough time and space for her sitters during sessions she preferably arranged in their familiar surroundings.