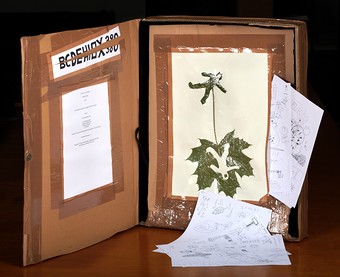 Christian Eisenberger has always had a deep desire to be outside, for many reasons. He experiences nature as a limitless space, a place of freedom and spontaneity that offers undisturbed development and the possibility of escape, a place of longing for peace and quiet. Though Eisenberger also views »nature« critically – »In our latitudes we have to speak of industrial landscape« he says. »The treatment of the soil is, after all, warlike.« – his works are nevertheless based on the implied origins and essentiality of nature. Playful and bold, Christian Eisenberger's works simultaneously convey transience as well as humour and easyness. In contrast to macabre and grotesque jokes, they radiate a childlike joy in playing and experimenting outdoors.

Photographs is all that remains, for his artwork will fade away eventually. The camera is Christian Eisenberger's canvas for landscape painting. Be it pinecones or branches, Eisenberger takes most of his materials from the sources of nature. Whereas Eisenberger's cardboard figures find their audience incidentally in the city, he is usually his own audience in the nature. At the same time, he repeatedly incorporates himself into his works: standing almost naked in a star-shaped gap of a frozen pond, wearing a red jacket and green cap and peering through a sheet of ice, or balancing in tall grass with a cross painted on his back.

15000.00 €
Inquire
See all works by Christian Eisenberger
back
jump to top