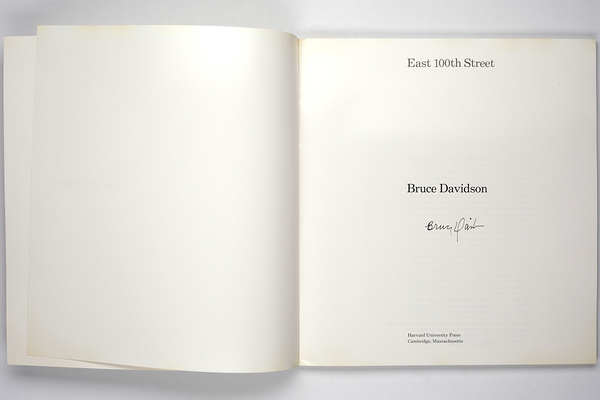 First paperback, rare signed edition. For two years in the 1960s Bruce Davidson photographed the people living on one city block in East Harlem, New York, using a large-format view camera. The result "is an exemplary exercise in the humanist social documentary mode" (Parr & Badger II, p.18); The book's glossy duotone reproductions -- all face-to-face on spreads with wide white borders stripped of captions and page numbers -- give the grimiest surfaces a rich warmth and a luxurious sheen"(Andrew Roth, The Book of 101 Books, p 196).

Bruce Davidson began photography at the age of ten in Oak Park, Illinois. He attended the Rochester Institute of Technology and Yale University and was later drafted into the army and stationed near Paris where he met Henri Cartier-Bresson, one of the four founders of the renowned international cooperative photo agency, Magnum Photos. After military service, in 1957, Davidson worked as a freelance photographer for Life Magazine and in 1958 became a full member of Magnum Photos. From 1958 to 1961 he created such seminal bodies of work as The Dwarf, Brooklyn Gang, and the Freedom Rides. He received a Guggenheim Fellowship in 1962 to photograph what became a profound documentation of the Civil Rights Movement in America. In 1963 the Museum of Modern Art in New York presented his work in a solo show.